Abstract: In the first of these three lectures Professor Sanderson covers the history of Śaivism, setting out his view of its principal divisions, their historical development, and their interaction, and locating on this map the entry point of an influx of Śākta Śaiva forms of ecstatic religion into what had previously been a cluster of austere, highly ascetic traditions. In the second he narrows his focus to examine the history of Śaivism in Kashmir, concentrating on the nature of its Śākta Śaiva elements, notably the traditions of the Trika and Krama, but stressing the importance of seeing how these were embedded within, and interacted with, more exoteric forms of the religion. In the third lecture, he presents evidence that these Śākta Śaiva traditions developed and flourished outside Kashmir in most regions of the subcontinent and that, though much of their later highbrow literature was modelled on the learned exegesis of Abhinavagupta and Ksemarāja there are reasons to conclude that they had pre-Kashmirian histories.

The second and third lectures demonstrate incidentally the inappositeness of the widely used term ‘Kashmir Śaivism’ to refer to the Trika and related Śākta Śaiva systems, the second by showing that these systems co-existed in Kashmir with non-Śākta, Saiddhāntika Śaivism, and the third by refuting or casting doubt on the notion that the Śākta Śaiva systems that received such learned attention in Kashmir in the tenth century were Kashmirian in origin 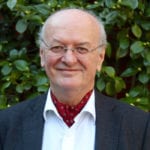 Prof. Alexis Sanderson: after a training in Classics, began his Indological career as a student of Sanskrit at Balliol College, Oxford in 1969. After graduation he spent six years studying the Kashmirian Śaiva literature in Kashmir with the Śaiva scholar and guru Swami Lakshman Joo from 1971 to 1977 while holding research positions at Merton and Brasenose Colleges. From 1977 to 1992 he was Associate Professor (University Lecturer) of Sanskrit in the University of Oxford and a Fellow of Wolfson College. In 1992 he was elected to the Spalding Professorship of Eastern Religions and Ethics at Oxford and thereby became a Fellow of All Souls College. He retired from that post in 2015. Since then he has been preparing a critical edition, with a translation and commentary, of the Tantrāloka, Abhinavagupta’s monumental exposition of the Śākta Śaivism of the Trika.

The 11th century Tantric text, the Yonitantra, evokes a Yantra representing the Yoni in which the central divinity is presented as Caṇḍālī, a woman belonging to what Dumont has labelled “the old prototype of the Untouchable”. Other Tantric texts ascribe the same significance to the Caṇḍāla woman or to women belonging to other low castes, most prominently the Ḍombī, the washer woman. What are the reasons behind this antinomian tribute to the lowest of low-caste women in Tantric texts? An answer to this question can be approached by a study of the representations of these castes in other literary genres. This paper will present an analysis of these literary images and on that basis address their use in Tantric texts.

Mikael Aktor is Associate Professor of History of Religions at Institute of Philosophy, Education and the Study of Religions, University of Southern Denmark. He holds a PhD from University of Copenhagen, a part of which was carried out at School of Oriental and African Studies, London. His field of expertise has so far mostly been within the study of Dharmaśāstra, in particular with a focus on caste and Untouchability. Today he is engaged in a research of North Indian Śaiva temple ritual and temple sculpture as part of a general interest in ritual studies and religious aesthetics.

Harunaga Isaacson was born in Kuma, Japan, in 1965. He studied philosophy and Indology at the University of Groningen (MA 1990), and was awarded a PhD in Sanskrit by the University of Leiden (1995). From Fall 1995 to Summer 2000 he was a post-doctoral research fellow at the Oriental Institute, Oxford University. After holding teaching positions at Hamburg University and the University of Pennsylvania, he was appointed Professor of Classical Indology in the Department of Indian and Tibetan Studies, Asien-Afrika-Institut, Hamburg University, in April 2006. His main research areas are: tantric traditions in pre-13th century South Asia, especially Vajrayāna Buddhism; classical Sanskrit poetry; classical Indian philosophy; and Purāṇic literature. Prof. Isaacson is a member of the board of Indo-Iranian Journal (since 2003) and the Governing Committee of the INDOLOGY Discussion Forum. He is also presently Director of the Nepal Research Centre and General Director of the Nepalese-German Manuscript Cataloguing Project (both positions held since April 2006), funded by the Deutsche Forschungs Gemeinschaft.

The paper will discuss types of liṅgas featuring four goddesses facing outward. These include a complex Tantric sculpture from Nepal (17th century) and its possible prototypes, the so-called śakti- or devīlingas found in Bengal, dating from the 9th to 13th centuries. A major problem is the identity of the four goddesses and the significance of these sculptures. The paper will also address the more general phenomenon of feminine liṅgas, namely liṅgas serving as a focus of goddess cult worship.

Gudrun Bühnemann is Professor and Chair of the Department of Languages and Cultures of Asia, The University of Wisconsin-Madison. For more information, see her webpage, http://lca.wisc.edu/~gbuhnema/

In the history of religion especially in the comparative study of religion goddess worship is a very underestimated and under prioritized exploratory field. General books on the history of religion either mentions goddesses in the periphery as the spouse of a god or as seen in a evolutionary scheme, where goddess worship is either placed as part of the archaic state of religion, as a part of a primitive fertility cult or maybe mentioned in relation to small isolated non patriarchal societies. And some scholars even tries to explain the nowadays veneration of goddesses as for example the Virgin Mary in Christianity as weak survivals of these earlier stages.

My paper will try to outline how research on devī-worship in the Hindu tradition is a very important exploratory laboratory to overcome this deficit. It is not only a fact that among the world religions, Hinduism has by far the most vigorous and diverse goddess mythology as well as independent goddess worship, it is also a fact that in Hinduism we find the most elaborated understanding of the Goddess.
Marianne C. Qvortrup Fibiger, Ph.D. and associate professor at the Section of Religious Studies at the Faculty of Arts at Aarhus University. She is especially interested in contemporary Hinduism and has done fieldwork different places in India as well as in Sri Lanka, Kenya, England, Mauritius and Denmark. She is interested in Śāktism from at least three perspectives: 1) As an important part of the Hindu tradition also in Diaspora 2) How or if local goddess worship corresponds with or relate to the textual background. 3) How research on Śāktism could be an important stepping stone in an understanding of Goddess worship as such.

Goddesses associated with snakes and healing snakebite are well known to anthropologists of modern Śākta traditions; Manasā in the Northeast and Nāgāttammaṉ in the South come immediately to mind. In Jainism we have Padmāvatī, and in Buddhism various goddesses like Jāṅgulī, Kurukullā, and Mahāmāyūrī specialize in curing snakebite. The origins of many of these goddesses remain obscure, but my research into the largely unedited Śaiva Gāruḍa Tantras suggests that some of them were popularized by this early corpus. In this paper I focus on those snakebite goddesses of the Gāruḍa Tantras who were incorporated into the wider and increasingly influential Śākta traditions of the ninth–twelfth centuries: Bheruṇḍā, Tvaritā, and Kurukullā. What do we know about their early identities and how did incorporation as nityās transform them? The latter two were also incorporated in Jain and Buddhist Tantra respectively, and are still worshipped today. My paper also presents evidence that Purāṇic chapters on these goddesses are directly borrowed from Tantric sources.

Michael Slouber is a Ph.D. candidate in South and Southeast Asian Studies at UC Berkeley. His research interests include Śaivism, Śākta Traditions, and History of Medicine.

This paper will attempt a synthetic overview of textual, ethnographic, and historical sources in Malayalam, Tamil and Sanskrit related to the cultural historical role and adaptation of Sakta worship in the temple cults of prominent goddesses in northern Kerala. Based ethnographically in the formerly royal shrines and temples of this region, where special Sakta priests conduct daily rites of worship with blood sacrifice and alcohol, and preside annually over festivals of spirit possessed incarnations of the goddess, I will cast a textual eye back over the Indological and literary record in a survey of the cultural history that eventuated in today’s ritual configuration. This region seems to have preserved important evidence for the amalgamation of a Sakta cult, with its hybrid priestly officiants, into the worship of local war goddesses under specifically royal patronage. My survey intends to highlight the nature of this evidence in its inter-relations as pointing the way forward to further Indological and ethnographic research.

[John] Rich[ardson] Freeman is a cultural anthropologist with a background and research interest in Indology (Sanskrit and Dravidian languages and literatures). He currently teaches courses on Indian civilization, Hinduism, and the anthropology of religion for the faculties of History and Religion at Duke University. His special area of research is Kerala, where he has carried out many years of ethnographic and textual work on the Teyyam traditions of spirit possession in Malabar, the wider region’s Brahmanical system of temple worship, and the literary history of Malayalam in its cultural relations with Sanskrit and Tamil.

The encounters with yoginīs, called melaka or melāpa, constitute the core of the post-initiation tantric practice in the Vidyāpīṭha texts, and priya- and haṭha- varieties were well known to the pre-Abhinavagupta śaiva tantric literature. This presentation will explore the nature of the haṭhamelaka as it is described in the Jayadrathayāmala, including its relation to the practice of provoked possession (āveśa), as well as of some other rare varieties of melaka that can be found in this text only.

Alexis G. J. S. Sanderson is Spalding Professor of Eastern Religions and Ethics, All Souls College, University of Oxford. He is a renowned expert on the history of Saivism and on tantric traditions. After taking undergraduate degrees in Classics and Sanskrit at Balliol College, Oxford, he spent six years in Kashmir studying with the celebrated scholar and Saiva guru Swami Lakshman Joo. From 1977 to 1992 he was Lecturer in Sanskrit in the University of Oxford, and Fellow of Wolfson College. Since 1992 he has held the Spalding Chair of Eastern Religions and Ethics in the University of Oxford, and is a Fellow of All Souls College.

This presentation explores the nature and historical development of goddesses and the category of Śiva’s “power(s)” (śakti) in the archaic Niśvāsatattvasaṃhitā. It is observed that while female deities have limited cultic importance, their significance increases in the later strata of the text, especially the Guhyasūtra. A shift from apotheoses of feminine-gendered cosmological categories to embodied goddesses appears evident, as are early developments in characteristic Śaiva doctrines concerning the roles of śakti in cosmogony and grace. The presentation also highlights some of the ways in which ritual forms and concerns of the Niśvāsatattvasaṃhitā presage those of early śākta-oriented tantric systems.

Shaman Hatley (Concordia University, Montréal), researches the literature, ritual, and social history of Tantric Śaivism in medieval India, and religion in premodern Bengal. Hatley’s dissertation, “The Brahmayāmalatantra and Early Saiva Cult of Yoginīs,” analyses the history of the Śaiva cult of yoginīs and provides a partial critical edition of one of its earliest scriptural sources, the Brahmayāmala. Hatley is a contributor to the Tāntrikābhidhānakośa (‘A Dictionary of Technical Terms from Hindu Tantric Literature’), and has authored several articles and book chapters concerning tantric practices and goddess cults. His current research focuses on the ritual roles and divinization of women in early Tantric Śaivism and Buddhism. He completed his Ph.D. in Religious Studies at the University of Pennsylvania in 2007, under the direction of Harunaga Isaacson.
Contact
Facebook Youtube Instagram Twitter Linkedin