Rohana Seneviratne, D.Phil. student in Sanskrit at the Oriental Institute  and OCHS student, was awarded the Saraswati Sanskrit Prize. He is the first person of Sri Lankan descent and also the first Oxford student to receive this award.

At the official award ceremony held in New Delhi on 25 March, Rohana received his award from Dr. Karan Singh, president of the Indian Council for Cultural Relations (ICCR), titular Maharaja of Jammu and Kashmir, and also an OCHS patron.

The Saraswati Sanskrit Prize is a biannual award instituted in 2008 by the ICCR in India together with the Department of Cultural and Religious History of South Asia (Classical Indology), University of Heidelberg, to recognise the contribution of students in Europe in promoting the understanding of Sanskrit and to foster deeper appreciation of  Indian culture.

Among the distinguished scholars at the ceremony were Mahamahopadhyaya Prof. Satyavrat Sastri, the first Jnanpith laureate for Sanskrit.

The prize includes a ten-day visit to India with all hospitality from the ICCR. Rohana was warmly received at the Rashtriya Sanskrit Sansthan and Special Centre for Sanskrit Studies at the Jawaharlal Nehru University (JNU) in Delhi as well as at the Sampurnanand Sanskrit University and Banaras Hindu University in Varanasi.

Video of the ceremony is available at: 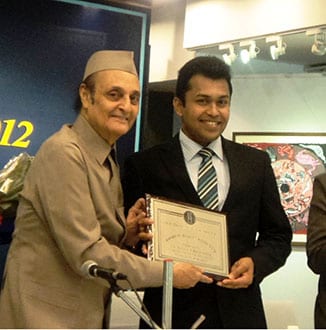