The Dharma Index and Ethical Investing

In October 2006, Emerging Markets Group (EMG) invited OCHS to participate in discussions on the formation of a Dharma Index, identifying a gap in the market for ethical investment packages suited to Hindu needs. The OCHS’s role was to provide the academic underpinnings of the Index. OCHS Academic Director, Prof. Gavin Flood, sees this as ‘an excellent opportunity for the Centre to show that Hindu Studies is relevant in a way that no-one previously thought possible.’ 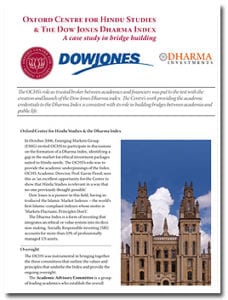 Dow Jones is a pioneer in this field, having introduced the Islamic Market Indexes – the world’s first Islamic-compliant indexes whose motto is ‘Markets Fluctuate, Principles Don’t.’

The Dharma Index is a form of investing that integrates an ethical or value system into its decision making. Socially Responsible investing (SRI) accounts for more than 10% of professionally managed US assets.

The OCHS was instrumental in bringing together the three committees that outline the values and principles that underlie the Index and provide the ongoing oversight.

The Academic Advisory Committee is a group of leading academics who establish the overall principles underlying the Index’s methodology. The centrepiece of this work is the document: ‘The Dharma Index: Ethical Investment Principles from Hindu and Buddhist Sources’.

The Dharma Index Religious Advisory Council consists of respected Hindu and Buddhist leaders representing a wide range of historical schools of thought within their respective traditions. Their role is to give their blessings and ratify the guidelines and methodology.

The Supervisory Committee ties the ends together. They are a broader group comprising academics, religious leaders, and financial experts who interpret the guiding principles and implement the screening in accordance with the index methodology.

Prof. Shashiprabha Kumar (Sanskrit Studies, JNU) of the Supervisory Committee commented that ‘the OCHS is unique in being able to bring together such a diversity of views to deliberate on practical applications of philosophical thought.’

After a year of extensive consultation over more than a dozen versions we had a document of principle that twenty-five esteemed scholars could stand by – ‘The Dharma Index: Ethical Investment Principles from Hindu and Buddhist Sources’. This fifteen-page document – essential to the formation of the Index – provides a concise overview of dharmic ethical values along with practical guidelines for interpretation in the context of investment. All future adjudication on the Dharma Index will be based on this document.

Prof. Richard Gombrich, Academic Director of the Oxford Centre for Buddhist Studies, said, ‘This was a very stimulating project to be involved in. There is little work done on ethics of investment in these traditions and even less in applying these ethics to practical cases. The resulting document is a real success – it points to a need for more thorough research in bringing these ancient traditions to contemporary life.’

The word ‘dharma’ is used by all Indian traditions in diverse ways. For the purposes of this Index, dharma particularly referred to values in Hinduism and Buddhism, with some reference to Sikhism and Jainism.

Key Hindu concepts highlighted as critical for a dharmic investment ethic included ahimsa (non-violence or non-aggression) and loka-samgraha (protection of the world). Of particular importance in Buddhism for ethical investment are the ideals of loving kindness (metta) and compassion (karuna).

Sumeet Nihalani, Dow Jones Senior Director of Sales (Asia Pacific and Middle East), said: ‘The OCHS has been instrumental in providing advice on the methodology of the Dow Jones Dharma Indexes. As global index provider we rely on the expertise of independent academic bodies to define the screens we apply to select the components of our faith-based indexes.’

The Dow Jones Dharma Index includes five indices: one global and one each for USA, India, UK, and Japan. Potential investments are screened according to dharma-based guidelines including corporate governance, and social and environmental impact. They reward companies that have worked to better the welfare of the world, whether in terms of environmental preservation, sustainability, or acting for the good of society, and they exclude companies that have negative impacts in any of these areas.

These screenings are reviewed quarterly.

The first of the Indices was launched at the Taj Hotel, Mumbai, on 15 January 2008. It was organised by Dow Jones, Stoxx Ltd, Dharma investments, and Emerging Markets Group and attended by 200 of India’s leading fund managers and bankers.

The launch was also an opportunity for the OCHS to launch itself in the corporate sphere. In the words of OCHS Director, Shaunaka Rishi Das: ‘A major challenge in the twenty-first century is to understand the increasing influence of Indian thought and cultures. The Dow Jones Dharma Index is a good example of constructive engagement between this influence and the modern world. Success in these engagements depends upon quality research, publication, and education. This is what the Oxford Centre for Hindu Studies offers.’