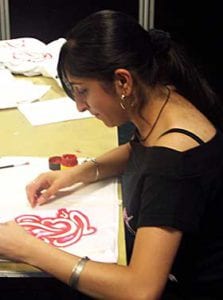 The Hindu Youth Festival 2001, which was originally planned to promote awareness of the OCHS among young Hindus in Britain, turned into a ten-day festival and mela attracting 70,000 people. It was a great success.

With the support of the Hindu religious community and business leaders, Hindu youth were facilitated to explore issues of identity in Britain, as well as social, moral and political issues, and to become conscious of the need to plan their own future.

The organisers of the youth events came from all backgrounds and represented every denomination and major Hindu youth group in the country. Historically it was the first time that these groups had ever worked together, and this is where the greatest achievement of the Festival lies.

The young people, who in the next ten or fifteen years will be the leaders of their communities around the country, worked together as one unit, setting aside sectarian identities, confronting their personal agendas and developing trusting and affectionate relationships.

They succeeded in providing nine evenings of interactive debate, discussion, dialogue, plays, lectures, multi-media presentations and lots of fun. The dynamic of relationships built up during these events was testing both to courage and sincerity but has provided an important foundation for future growth within the community.

The OCHS was able to facilitate this because of its non-sectarian, non-political yet scholarly ethos, and we were very pleased with the positive results. The youth themselves are very enthusiastic to take the initiative forward and build on it for the future. Meetings are currently being held about and will continue over the coming months.

The festival received welcome support from those within and outside the Hindu Community. In a letter to the youth, the Prince of Wales emphasised that: ‘This event will help strengthen the multi-cultural and multi-faith society in which we live. By endeavouring to explore and define your own tradition within British culture, you are also helping our country to define its own identity’.

Prime Minister Tony Blair added: ‘This event provides British Hindus with an important opportunity to explore their culture and their faith. It will also give the participants an opportunity to discuss what it means to be a young Hindu in Britain today.’ Messages of support were also received from the Archbishop of Canterbury, Atmasvarupa Swami, Bhakti Charu Swami, Tejomayananda Swami, Muniji, HE Nareshwar Dayal, the Indian High Commissioner, Lord Dholakia, OBE, and Ken Livingstone, the Mayor of London.

The Festival attracted an impressive amount of media coverage. It was covered by BBC and ITV television broadcasts as well as local and national radio, including live broadcasts for BBC Radio 5 Live and the BBC World Service. Stories and pictures also appeared in the London Times, the Guardian, Times of India, India Abroad and all the British Asian media.

We would like to thank the young organisers and the 250 volunteers for their dedication and commitment. The OCHS would particularly like to thank Mr. Arjan Vekaria for his inspirational and practical role in developing the Festival, Mr. Gopalbhai Popat for his wise counsel and experience, Kirit and Meena Pathak for their patronage of the event, Sri Rameshbhai Oza for the wonderful Bhagavat Katha he delivered over a period of nine days, Shrastri-ji and his priests for the Mahavisnu Yajna and Muniji, Bhakti Charu Swami and Atmasvarupa Swami for their inspiration and courage of leadership.