Ashok Vaswani: From Bombay to Barclays

On 20 May, Mr Ashok Vaswani, CEO, Retail and Business Banking, at Barclays, delivered the final lecture of the 2013 Oxford Centre for Hindu Studies Leadership Series. The event at Oxford’s Saïd Business School was sponsored by Deloitte.

In the lecture “From Bombay to Barclays”, Mr Vaswani shared the ideas and influences that have led him to become head of Retail and Business Banking at Barclays. He spoke on the role that Indian thought, culture, and society have had on his career development as a business builder and on his philosophy on leadership and strategic thought and practice. He also looked at how we measure gain and success and how we find where the balance between community and work.

Mr Vaswani spoke about the need for values such as humility and the impossibility of learning from a position of arrogance. He talked about how the the cultural values he learned in his youth have served him in his work in Asia, Africa, the Middle East, Europe and the US.

Viraj Aggarwal, one of the students on the Leadership Programme said, that, “of the many business-oriented talks I’ve attended, this was by far the best. A major part of the talk was about developing a deeper understanding of business and its need to focus on making a long-term difference to the world, with money-making as an outcome rather than the goal; and how a business needs to define a purpose, and to build processes rather than product if it is to retain any permanence.”

An important aspect of this OCHS lecture series is exploration of the cultural values that leaders bring with them to their roles. On this Mr Vaswani said that, “culture is what you do when no-one is watching”, and on a related note, that the true self, “is demonstrated when you are in boiling water.”

The talk was followed by a dinner at the Oxford Centre for Hindu Studies for Mr Vaswani, representatives from Deloitte, and Oxford students and scholars. The dinner was an opportunity to continue the discussion, while allowing the participants to gain a deeper understanding of each other and the work they do in their respective fields.

The Oxford Centre for Hindu Studies Leadership Programme aims to educate and inspire potential leaders and pioneers to serve the aspirations and needs of the community, and to prepare them to engage in national life, politics, public administration, business, the professions, and the voluntary sector, whilst being mindful of good professional practice and the practice of dharma. Previous speakers have been, Rt Hon. Dominic Grieve QC MP, Attorney General for England and Wales; Lord Meghnad Desai; and Mr Alpesh Patel, a barrister, businessman, and broadcaster. As well as the lecture series, the programme organises internships for Oxford students with leaders in the private and public sectors. 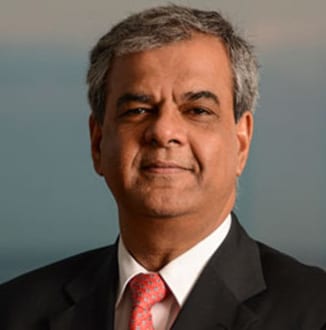