This year the Oxford Centre for Hindu Studies will be running its third Oxford Summer School.

The 2017 Summer School will run from Friday 23 June to Sunday 25 June at Nuffield College and the OCHS.

Topics:
The self’s relationship with the self: Using yoga to shape up the mind
Dr Jessica Frazier
For many, yoga is a way to shape up the body or to purify the mind – but the Sanskrit reminds us that in its most basic meaning yoga is a ‘yoke’ by which we can gain control of the body and mind, and turn them in the direction we really want to pursue. In this session, we try to solve the puzzle of the Yoga Sutra’s third section detailing magical powers, and look for answers in the early forms of Yoga that are found in the Mahabharata. Of particular interest will be the lessons of the witty female yogi Sulabha.

The Kama Sutra on relationships: Messy meetings beyond love and duty
Dr Jessica Frazier
Dharma Sastras tell one story of good wives and husbands, while the Kama Sutra puts them all in question by telling stories of warring wives, witty wooers, and courtesans who are really just good businesswomen. This session will contrast Dharma’s ideal relationships, with the messy reality that is depicted in the Kama Sutra. We will find that two aren’t quite as far away as they seem…

Desire, ignorance, and death: Hindu ascetic views on human relationships
Dr Rembert Lutjeharms
Sadhus – Hindu ascetics – are one of the most easily recognisable elements of Hinduism. For millennia, sadhus have renounced society and its comforts to live a solitary life of hard asceticism and rigorous spiritual practice, in an attempt to come to know their self (atma). Based on passages from ascetic texts such as the Sannyasa Upanisads, this talk will explore the notions of self and world that inform such total renunciation, and look at the implications of this for human relationships.

Hinduism and the environment
Anuradha Dooney
From climate change and melting icebergs to pollution and holes in the ozone layer, we are all aware of issues concerning our relationship with the world around us. Hindu sacred texts have always recognised the interdependence of humanity and nature. The Vedas and Upanishads, the Puranas, Mahabharata, and Ramayana, depict a reality of reciprocity where land and sky and the cosmos beyond, exist as one interconnected sphere. What happens in our ‘little’ daily reality reverberates in the ‘big’ reality beyond. This talk draws upon the doctrine of five debts, the concept of rta and yajna, and a donut to consider the particular contribution Hindu traditions bring to the debate.

The Hindu kite of law as a model for dharmic relationships
Prof. Werner Menski
In this talk we see how a ‘kite model’ of law can be skilfully balanced and fine-tuned by Hindus in all kinds of life situations to work on different sets of relationships and to lead a dharmic life. We will focus on examples, taking important terms such as svadharma, rajadharma, stridharma and others to explore the possibilities of human relationships within an ethical framework defined by Hindu values.

Hindu Image-Worship and its Multiple Relationships
Prof. Julius Lipner
One of the most obvious features of Hindu belief and practice, not only to Hindus but also to the casual observer, is the worship of images – many gods, bearing many hands and heads. What is the history of this practice and what does it really mean? In this illustrated lecture we see that image-worship in Hinduism is laden with the concept of multiple relationships: relationships between different aspects and features of the Godhead, enriching relationships between the Deity and the worshipper, and among the worshippers themselves, their environment, and other faiths. Image-worship in Hinduism can be a force for establishing identity, cohesion, and positive outreach.

All creatures great and small: A Hindu view
Anuradha Dooney
Images of divinity in Hindu traditions are replete with animal association. A snake adorns Shiva’s neck; a gigantic bird carries Vishnu while Durga is depicted atop a lion or tiger. Other deities like the elephant-headed Ganesha and the half- man, half -lion Narasimha combine both animal and human form in one. Yet what do Hindu traditions teach of our relationship with animals? Is vegetarianism the ideal? What of hunters and animal sacrifice? Are cows really sacred and do hogs and dogs really rank lowest in the scheme of things? This talk explores the world of wildlife in Hindu sacred text and offers insights into how Hindu teachings regard our fellow creatures.

The sessions run from 10am–6pm on Friday and Saturday, and from 10am–1pm on Sunday.

The Summer School fee is £500 (excluding meals and accommodation). We do book restaurants for meals and invite attendees to come together to continue the discussion. 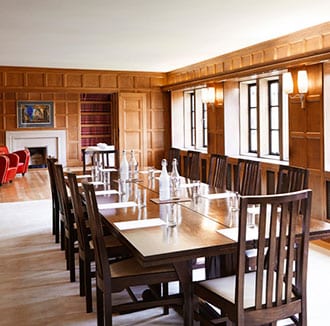