A participation-by-invitation workshop was organised by Dr Marianne Fibiger, Aarhus University, in collaboration with Dr Bjarne Wernicke-Olesen, OCHS, aimed at networking, funding applications and to facilitate an in-depth discussion amongst scholars. The workshop was funded by the South Asian Religion research unit (SAR) at Aarhus University, Denmark.

The workshop addressed new research and insights into the relationship, overlap, and interplay between ritual performance and the uses of texts and body within South Asian religions historicallly and presently, in South Asia and beyond.

The triple interrelationship between text-ritual-body both on an ontological and a performative level was the main theme.  Papers were submitted on a variety of areas including pan South Asian traditions, esoteric practices, the exoteric temple cults, reinventing tradition, and the differences between orthodoxy and orthopraxy. 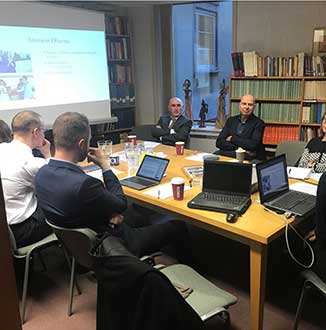