Bengali Vaishavism in the Modern Period

This project undertakes the mapping, collection, translation and investigation of literature and any other relevant material related to, or dealing with, the modern development of Bengali Vaisnavism from the mid-18th century to the mid-twentieth century. It aims at facilitating research in a number of areas such as theology, sociology, history of ideas, philosophy, gender studies and anthropology. 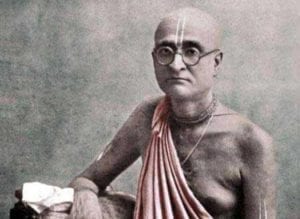 The movement initiated by Chaitanya (1486–1534) and his successors in North and East India was one of the last medieval cohesive expressions of a bhakti pan-Indian movement that began centuries earlier in South India. The movement refined the popular bhakti cult of Shri Radha and Krishna through an intricate study of emotions (rasa). It was also among the last ones to provide a Vaishnava commentary to the Vedanta in the early modern period, in the shape of an articulated critique of Shankara’s non-dualism by Baladeva Vidyabhusana. Bhakti, as a personalist path of development and spirituality, has remained one of the specific theological areas of exploration of the Vaishnava schools in South Asia. Within that broad religious field, Bengali Vaishnavism has produced new theoretical, cultural and social movements during the 19th and 20th century— among others as a result of the colonial presence of Britain—and it has now become a global phenomenon.

Anthropological studies of Bengali Vaishnavism conducted in the West from the 1960s onwards have focused on folk religions in Bengal little touched by modernity particularly in regard to tantric, sexual practices. Important research has also been carried out on the pre-modern history and early texts of the movement. Sociological research has concentrated on new Vaishnava religious movements such as ISKCON, popularly known as the Hare Krishna movement, but much less has been written about the modern and pre-modern period prior to the 1960s. The study in India of modern forms of Bengali Vaishnavism is scarce, perhaps due to a neglect of currents of thought less supportive of Hindu nationalism or irrelevant to key social and political issues. There is little research about the transformations that the movement underwent during the early modern and modern period, which have led to its globalisation. Another challenge in South Asia has been the lack of a tradition of religious studies as a systematic historical, sociological, and theological discipline.

The aim of the project is to encourage a critical mass of research primarily in six areas:

Of interest is, for example, the development of Vaishnavism as a folk religion in Eastern India and Bangladesh, its growth among the Bengali middle class (bhadralok), and the orthodox communities of Nabadwip and Vrindavan. Relevant is also research on ongoing processes of transplantation of the tradition to various parts of the world.