In 2010, the nascent Hindu-Christian Forum won funding from the Department of Communities and Local Government to undertake a research project in the form of a ‘listening exercise’ exploring the relations between Hindu and Christian communities in the UK. 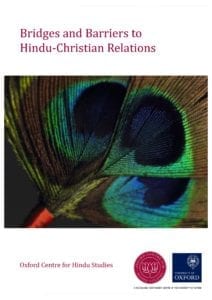 The OCHS took on this project, and with the consultation of the Oxford Centre for Christianity and Culture, Dr Jessica Frazier designed and carried out the research from June to December of 2010. The research took the form of approximately fifty detailed interviews with Hindus and Christians in London, Leicester, and Preston, recording accounts of people’s experiences, and their attitudes, interests, impressions, needs, and concerns. In particular the research was designed to explore underlying tensions and theological attitudes, encouraging people to reflect on issues of truth and relationship that are central to interfaith.

The research resulted in more than thirty hours and 100,000 words of interviews containing material on Hindu and Christian experience in the UK, and on issues of religious truth, conversion and controversy, and successful interfaith.

The first draft of the report was presented at Lambeth Palace on 16 February with the final report published in May 2011.

The official launch of the report was at the House of Lords in November 2011.