This Hindu Youth Survey is the first survey of its kind ever attempted, developed with the Hindu Youth Festival programme. The project was headed up by Romila Santosh and Savita Vij. Both worked very hard to produce a sixteen page questionnaire with the help of OCHS Academic Advisory Board members Prof. Kim Knott, Dr Malory Nye, and Dr Eleanor Nesbitt.

A group of young volunteers helped the team to finish 500 completed survey questionnaires and fifteen hours of group interviews. The team also received 200 requests from respondents to take part in future research.

This material now needs to be analysed in such a way that it is of use to the Hindu community, including religious and community leaders and the youth themselves. The analysis will be used to formulate future plans that are appropriate to the needs, interests, and concerns of the present generation.

Some of the responses received were noteworthy, showing that Hindu youth in the UK claim not to understand the rituals and practices of their tradition – neither the reason behind them, nor the content. However, they do make clear that they are interested to learn about these. Language seems to be one of the major barriers in their religious education. They also point to lack of qualified teachers, where in many cases elders neither seem to know how nor have the time to communicate the significance of these practices.

The majority of youth clearly do want more events such as the Hindu Youth Festival, and they liked the fact that the youth were able to help organise the festival themselves.

Education has been pointed out as a major need in the community. The Oxford Centre wants to help facilitate gifted Hindu students in the study of their own tradition so that they may become learned, articulate, and broad-minded representatives of their culture. Efforts to feed the intellectual, cultural, and spiritual needs of the community now will ensure the preservation and continuity of the culture for the future. The OCHS, through its association with Oxford university, is taking the lead in this higher-level education need.

A sample of 400 participants completed a survey and some youth took part in group discussions, in July and August 2001. The following summary offers a few highlights of the findings.

An overwhelming majority of the youth said they were happy to be Hindu (93%), of these 84% described themselves as being religious, and 83% agreed that it was important for them to practice their religious/spiritual beliefs, and that their religion helped them lead a better life (85%). However, questions around personal beliefs and values showed that up to one third of this group were not clear about core beliefs that are central to Hindu dharma, such as the eternal nature of the soul and the concept of reincarnation.

The majority of the group felt that it was important for them to practice their religious/spiritual beliefs (83%), and felt that religion helps them to lead a better life (85%). In terms of prayer, most said they prayed regularly at home (78%), and find it beneficial (77%); i.e. it helps them to feel calm, relaxed, and peaceful. 81% visit a temple on a daily to monthly basis. The majority of the youth said they benefited from attending services, prayer meetings, and places of worship (81%).

An overwhelming 90% said it would be important to teach their children about Hinduism, showing a clear desire to pass on religious tradition to future generations.

The responses varied greatly in terms of social and personal issues, e.g. the acceptance of pre-marital sex, abortion, and homosexuality. A significant number of youth felt they were uncertain about these matters.

Only 38% of the youth said that the caste system influences some of their decisions and a slightly higher number said that it does not have an influence in their lives at all. 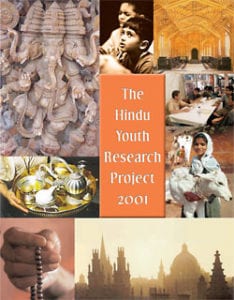 ‘Divided we fall, united we stand …The uniting factor is Sanatana Dharma, but we let our differences divide us too much. We are one, but we don’t see that. All groups should be supported, Swaminarayan, ISKCON ….’ A lack of strong leadership is seen to be a contributing factor to the perceived lack of unity.

The majority of respondents said they would like to have more Hindu political representation in Britain (72%), ‘need more Hindu MPs, and need people to represent our voices’. This would allow for greater access to resources. ‘We need to start making some noise, banging the tables…whoever shouts the loudest wins…the Council thinks we’re a self sufficient little community that doesn’t actually need a thing. They are not closing doors, we’re simply not opening them.’

The survey showed that there was uncertainty about Hindu human rights issues (45%), and again this was seen to be due to a general apathy in the community, ‘comes back to our apathy… This is not our problem’.

Both the discussion groups and the questionnaire show that young Hindus felt a lack of knowledge about Hinduism. Hinduism is their way of life, but they feel a need to question it, and the youth have a lot of questions which they don’t feel have been answered. The most commonly cited reason for attending the Hindu Youth Festival 2001 (HYF 2001) was to ‘find out more about my religion’. Some of the responses on this issue included, ‘making all teaching modern and relevant to us’…’make it relevant to their life in Britain’.

Some of the main issues about practicing or learning Hindu culture appeared to arise from a lack of education in the significance of ritual and scriptures. Regarding the latter, a lack of English translations posed a problem. Many young people expressed a desire to understand Hindu culture in English.

Most respondents expressed a frustration with the scant educational resources available about Hindu traditions. Only 28% felt that the media positively represents Hinduism, and only 10% thought that the British press gave a good source of information about Hindus and Hinduism. 72% thought the internet was a better source, but again the information provided was seen as quite general. Suggestions for the types of resources needed include the ‘launch of a comprehensive website, provide a discussion forum… give a wealth of information’ and ‘make it more accessible’, through ‘more television programmes with explanations of Hindu rituals and the true significance of them’.

Most youth were clear that they want more festivals like HYF 2001 and ‘have more gatherings in and around the UK so that the younger generation can get together and keep the religion going’. Further suggestions were made, for example having drop-in sessions where people can get ‘real answers to real questions’. The young people expressed a desire to focus on the more practical aspects of Hinduism, for example meditation and Ayurveda.

Hindu Culture in the Modern World

Most of the youth participants thought that Hinduism is relevant in the modern world (88%). However, discussions highlighted the fact that they feel a need for a greater understanding of how it is relevant to their lives. They feel that the role of Hindu organisations is to provide the resources for communicating Hinduism, through activities and festivals such as HYF 2001, that are fun, modern, and in English.

Overall, this group of Hindu youth were clear about their aspirations and personal religious practices, e.g. prayer and visiting temples. They were also positive about Hindu scripture and ritual as well as a perception that Hindu culture is relevant in the modern world. However, there were areas where uncertainty was high, e.g. social and personal issues. It was also felt that there is a significant lack of knowledge about basic Hindu concepts and practices. Although Hindu youth feel a strong personal sense of community, they also feel Hindus need to work together more in order to gain greater recognition in British society and better resources for their own community. Poor resources and facilities for religious and cultural education are seen as a serious problem if the tradition is to maintain its stability and develop in the future.

Summing up: The respondents were frank in their analysis of their problems, their lack of training in their tradition, and their fears for the future of the culture in the UK but, significantly, they want to develop their self-identity, their community, and their positive contribution to the quality of life in the UK.