An Indonesian national, Pasha Hanifa graduated with a Bachelor of Arts (Degree with Honours) majoring in Islamic Studies at The University of Melbourne in Australia. He will soon be reading an MPhil in Classical Indian Religion at the University of Oxford.

His undergraduate research enquires into the nature of politics of religion and religious populism. His thesis in particular focused on the issue of Islamism and the state in Indonesia and its impact on minority faiths, including Hinduism and Buddhism. He analysed the ideology of the Islamic Defenders Front and how developments within Islamists thoughts are not exclusive to the Middle East. His research sheds light on how Indonesia has produced its own lineage of Islamist thinkers that are unique to the context and setting of Indonesia that makes it distinct from trends found in the Middle East, such as populist organisations professing loyalty to a pluralist national ideology.

While his academic research generally focuses on religion and the state, he also has a deep interest in the history, theology, and philosophy of Islam and Hinduism specifically. In particular, he researches on Balinese Hinduism, including both the modern Agama Hindu Dharma and the traditional Balinese Śavisim, and actively raises awareness of the distinctively Balinese Hindu culture to more mainstream Hindu communities that originate from India. His deep interest in the development of Balinese Śavisim and its historical roots to South Indian Śavisim and the more mainstream Vedic traditions has led him to continue pursuing his further studies in this field as a postgraduate student after his honours year.
He is very passionate about cultural and inter-religious dialogue and has taken leadership positions and has been a founding member of university student clubs such as the University of Melbourne Interfaith Exchanges Society, Indonesian Language and Studies Association, and the ASEAN Students at Melbourne University. 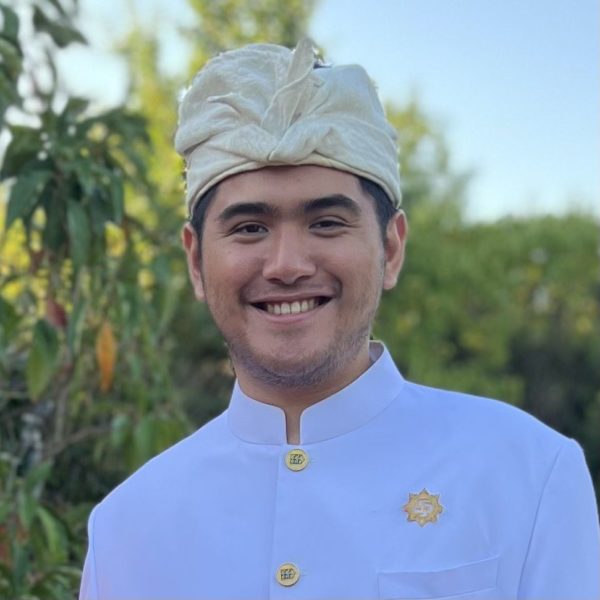