Thinking Inside the Box:
The Concept of a Category in Indian Philosophy 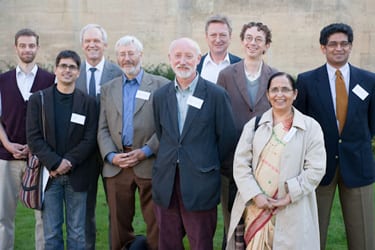 One of the characteristic features of ancient and medieval philosophy both east and west has been its propensity to analyse existence into particular categories and make fine distinctions in different philosophical areas. This conference would focus on the way this process has operated in the Indian philosophical context. For example, in Buddhism the Abhidharma developed sophisticated categories for the analysis of mind, Samkhya for the analysis of experience, and Nyaya Vaisheshika developed ontological categories. We might even call this process of categorisation a philosophical style of thinking.

The six categories of being of Praśastapāda (substance, quality, motion, differentiator, universal, inherence), together with the category of non-being, constitute the ontology of classical Vaiśeṣika metaphysics. Raghunātha Śiromaṇi, the sixteenth century peer of Caitanya in Navadvīpa, put pressure on the classical system, arguing in favour of a radical expansion to include eight new categories: power (śakti), ownedness (svatva), moment (kṣaṇa), causehood (kāraṇatva), effecthood (kāryatva), number (saṃkhyā), the qualifying relation pertaining to absence (vaiśiṣṭya), and contentness (viṣayatā). In the seventeenth century, however, there was a reaffirmation of the seven category ontology in the work of thinkers like Mādhavadeva Bhaṭṭa and Jayarāma Pancānana. I will examine the philosophical significance of this reaffirmation. I will argue that Raghunātha’s expansion is based on a commitment to a form of non-reductive realism. What the seventeenth century philosophers introduce is a new concept of realism, one which defends the compossibility of reduction and realism with respect to some type of entity. This ‘sophisticated realism’ (Dummett) is what makes it possible for the reality of entities in Raghunātha’s new categories to be acknowledged, but combined with an affirmation of the seven category metaphysics. I will ask whether it is nevertheless the case that Raghunātha was right to think that there are types of property irreducible to those admitted in the traditional system.

This paper will address the question whether and to what extent the ontological categories of early Indian philosophies can be looked upon as what might be called ‘natural categories’, categories that correspond in some way to the reality they intend to describe. It turns out that some of the Indian categories are of this kind, others are not. Examples will be discussed.

Whereas some categories clearly are the outcome of mental deliberations, such as the dharma-taxonomies of the Buddhists, the padārthas of the Vaiśeṣikas, or the tattvas of the Sāṃkhyas, others seem to arise from within the cognitive models of Indian culture. This paper explores the concept of bhāva as one of the categories arising from within the Sanskrit linguistic and philosophical traditions and traces its transformation into one of the core categories of Sanskritic thought.

This paper examines Nyaya’s understanding of the sources of knowledge, especially perception and inference, as generating genuine subkinds of cognition that are discernible by introspection as well as through our own and others’ behaviour, and addresses how typological resources are used by the school in its epistemological theory. By being able to recognize a cognition as perceptual, inferential, analogical, or testimonial in character, we have access to our knowledge such that doubt and controversy can be resolved. The hinge premise is that we may assume such cognition to be veridical. Like contemporary disjunctivists, Naiyayikas see pramana as natural processes and their results as falling into natural kinds, with close imitators, illusions, incorrect inferences, false testimonial comprehension, and so on, as something else altogether, not the same at all, though a wider uniting kind may be identified, being-a-property, being-a-psychological-property, and so on up through the categorial system. This facet of Nyaya’s epistemology helps to solve an issue facing modern reliabilist externalism, which is the position that beliefs receive a default positive epistemic status in virtue of being the results of reliable processes of belief-formation. The issue is how to differentiate doxastic processes in an epistemically relevant fashion. Nyaya has a straightforward answer–identify candidates by the highest standard, one-hundred percent reliability, and correlating marks (jati-vyanjana)–an answer that this paper in the end says a word or two to defend.