At the end of June, 2016 our Centre was graced with a visit from His Holiness Swami Niranjanananda Giri, who leads the Sri Gnianananda Giri Peetam, near Kanchi, in Tamil Nadu. Swamiji was accompanied by a small number of his followers, including children, and came to hear about the development of Hindu Studies in Oxford, and for a tour of the city.

The trip was arranged by Dr Dharshana Sridhar, and was the culmination of a series of meetings Dr Sridhar led to explore the possibility of establishing a scholarship for gifted students through the Oxford Centre for Hindu Studies. Dr Sridhar, and her fellow devotees wanted to develop this scholarship in honour of their acharya, His Holiness Swami Haridhas Giri.

As is often the case in England the weather was not kind to us on the day of the visit but the jolly mood of our visitors made up for that, and the swift disappearance of the chocolate biscuits showed that the children were pleased.

We gathered in our library and, surrounded by 25,000 books, we discussed the current need to study Hindu traditions closely; how this does not yet happen in India; how valuable a scholarship will be in promoting bright students to become experts on their own traditions; and how by working together we can develop the emerging field of Hindu Studies, both in Oxford and in India.

We concluded the meeting with all the donors to the scholarship fund, headed by Swamiji himself, signing an agreement establishing The Swami Haridhas Giri Scholarship, aimed at facilitating students, especially in the study of Bhakti philosophies, theologies, and practices.

This Scholarship, one of the first of its kind in Europe for Hindu studies, is the largest endowed scholarship the OCHS has received, and the scholars and students of the Centre expressed their heartfelt gratitude to the Peetam, and all its devotees. The gift of an endowed scholarship provides the centre with a permanent fund from which scholars and students can receive support. We look forward to working together for many years nurturing the field of Hindu Studies, contributing to a global discourse, and influencing thinking and decision making through excellence in education. 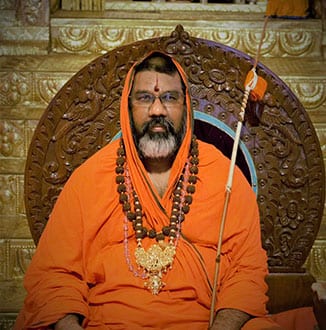