Jabbal Village in Himachal Pradesh, India, is approx 100 miles east of Shimla in the Pabbar Valley. It is in the foothills of the Himalayas at about 8,000 feet.
There are approx 500 people living in Rajput and Mistry and Koli sections of the village.
In 1974 Peter Sutherland, Eva Skalla, Francis Pettitt, Romilly Gregory visited the village in August 1974 to make a film about village life.
In 2007 Eva and Romilly took the film back to show to people in the village, and made a new film about the changes that 33 years have bought to the community.
In 1974 it was a remote place, in the midst of the forest, three hours walk from the nearest road with very limited communications outside the immediate valley. In many regards, the village is a development success story – the community is thriving, there is more to eat, greater security of basic livelihoods, the children are now being educated. Villagers say that life is easier and better. But there are threats and fears, notably with regard to changes in climate and habitat. The old forest has gone. The climate is hotter and dryer.

The Jabbal Village Film Project is being archived by the Oxford Centre for Hindu Studies at the request of Romilly Gregory and the Team. The Project Team wish the materials to be made widely available under a Creative Commons license. To that end we are making low-resolution video available online with the high resolution materials kept on site for researchers. 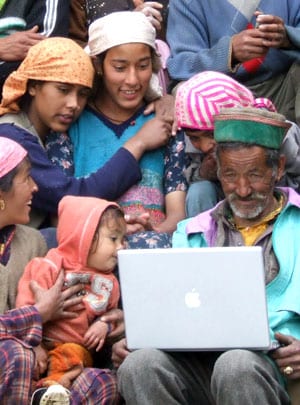