Religious piety, interfaith activism, and wholehearted service to others marked the life of the Rev. Dr. Murray Rogers  (1917-2006).

Born to a successful English stockbroker, Rogers went on to study at Queens College, Cambridge, where he met CF Andrews, a prominent Christian in India, and a close friend of Mahatma Gandhi. After finishing his religious education, he served his curacy at St. Andrews Church, waiting for the chance to leave England for India and become a missionary. The onset of World War II prevented this, however, and he took up work at the headquarters of the Church Missionary Society in London.

In 1946, the Rogers family moved to Khatauli, in the district of Lucknow, in northern India. Shortly after this, he took up a chaplaincy at an agricultural institute in Allahabad, remaining there for four years. They spent a year at Sevagram, Mahatma Gandhi’s ashram in Maharashtra, as Rogers explored simple living and the intersection between his religion and the ones that surrounded him in India. 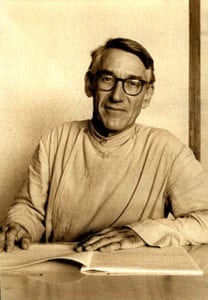 Rogers tried to reconcile the lifestyle he led – on a missionary’s salary, which was far from extravagant – with the lives of those around him, who often lived on even less. Soon after leaving Sevagram, he and his family, along with a friend, Heather Sandeman, established Jyotiniketan, meaning “house of light” in 1954. This ashram served as the Christian counterpart to Gandhi’s Sevagram, and was located in the village of Kareli, Uttar Pradesh. Jyotiniketan soon drew many visitors, including not just the locals but also many Roman Catholics and other Christians seeking a different kind of spirituality. It was in this context that Swami Abhishiktananda became close with Rogers, a friendship that would last until Abhishiktananda’s death.

Also at this time, Rogers became active in global inter-faith circles, doing pioneering work in bringing together peoples of different religious backgrounds. When he left India in 1971, this passion for interreligious dialogue took him to Jerusalem, where he sought to establish an interfaith centre in the Holy City. Nine years later, he was expelled from Israel for “fostering disharmony” after speaking out against the harm done to the Palestinians by the Israelis. Thus, the Rogers family and the ashram all moved to Hong Kong, where they resided for the next nine years. Here, he came into contact with a number of Buddhists, which he says greatly helped him in his journey through spirituality.

Following this, Rogers and Jyotiniketan shifted to Canada for almost a decade, working with the Mohawk peoples of Deseronto, Ontario. At the age of 82, he finally returned to England, settling in Oxford. He continued to share his insight and wisdom with many others until his death in 2006.

Rev. Rogers left the Oxford Centre for Hindu Studies with his personal papers and documents, which are being currently being scanned.