He is a Fellow of the German Academic Exchange Service (DAAD) for Higher Studies in Germany. He has a Dr.Phil. from the University of Freiburg/Br (1966) in History of Religions, Comparative Indo-European Philology, and Latin (besides Indology) as elective subjects in the grade Summa cum Laude. D.Litt. in Ancient Indian History and Culture from the University of Allahabad on ‘A critical Study of the daily Puja Ceremony of the Jagannatha Temple in Puri’ (published under the title ‘Communication with God’). He has taught at the Universities of Aligarh, Udaipur, Freiburg (twice), Tuebingen (twice), Heidelberg, Berlin, Leipzig, and British Columbia (Vancouver). He is Chief Indologist and Field Director of the Orissa Research Project (1970–5) of the German Research Council (DFG), and has been Principal of the Ganganatha Jha Research Institute, Allahabad, for over twenty years. He has contributed around ninety papers in English, German, Sanskrit, and Hindi to various Indian and International Journals on Religion, Philosophy, History, Literature, and Vedic/Puranic studies. Published 22 books on subjects mostly pertaining to religions and literature of India. His specialisations are: Indian Religions and Philosophy, Vishnuism (especially Pancharatra school), Vedic sudies, Sanskrit Literature, Grammar, and Philology, Cult practices of Orissa, and Gaudiya Vishnuism. 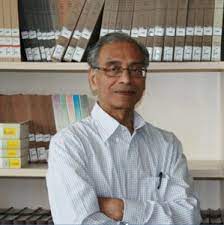