Professor Mandakranta Bose studied Sanskrit and Hindu religious texts (Smṛti and Mimāṃsā) in Calcutta, comparative literature in Vancouver, and holds a doctorate from Oxford in Sanskrit textual studies in the classical performing arts of India. Focussing her research on early Sanskrit texts as well as drawing upon later sources in Bengali, Professor Bose taught religious and gender studies in the University of British Columbia, Vancouver, Canada.

Professor Bose is a former director of the Centre for India and South Asia Research at the University of British Columbia, and is now an Emeritus Professor there. She is a Fellow of the Royal Society of Canada and the Royal Asiatic Society of Great Britain.

Professor Bose’s research interests comprise the Sanskrit textual tradition of the performing arts of India, Sanskrit literature, including the Dharmaśāstras, the Hindu religious tradition, the Rāmāyaṇa, and gender studies. 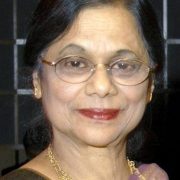