From 27–29 March, OCHS Director Shaunaka Rishi Das visited Belgium, speaking at the Hindu Forum of Europe on the future of Hindu education in the continent.

The two-day program was hosted by the Hindu Forum of Europe, an organisation founded in 2006 as the voice of Hindus in Europe. There were delegations from Belgium, England, France, Portugal, Holland, Hungary and Austria. The first day saw a meeting of the delegations while the second day featured a series of presentations at the European Parliament and was attended by a distinguished guest list.
Among the many important issues raised, one of the key matters addressed by Shaunaka was the development of Hindu education in Europe and the role of the OCHS in this development.
“The advancement of awareness, education and research in Hinduism is still an emerging field. The responsibility of providing such support lies not only with government, but also with private followers, academics and institutions related to Hinduism, ” says Shaunaka. “The focus on Hindu education in Europe and especially Oxford is critical. The academic tradition here can bring a uniquely dispassionate and evaluative approach to the subject. The study of Hinduism in Europe can offer fascinating insights into the way Hindu civilization has spread and adapted around the world. Britain, France, Germany, Holland and Denmark are rich in resources and research material. Understanding the national and local identities developed by Hindus will all feed into better models for integration.”
The meeting also benefited from contributions from Sir Graham Watson, MEP for Somerset and North Devon and Prof Nathu Ram Puri, founder and CEO of Purico Group Limited. 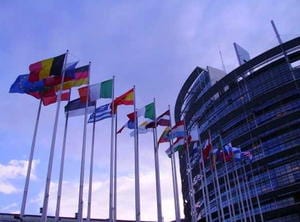 Nehru Centre talk: Does that mean I am God?: Understanding Vedanta?

Vedanta is today the predominant form of Hindu religious philosophy and has been so for many centuries.  But what does Vedanta actually teach? And how accurately do the writings of Shankaracharya reflect the ideas of the Upanishads on which Vedanta is supposed to be based.  In this talk we explore these and other questions with particular emphasis on the Vedantic notion of inner divinity and what that implies for human life. 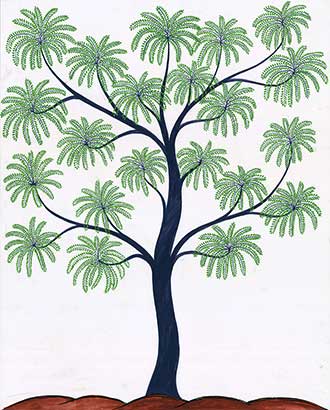 Nehru Centre Event
Friday, 9 December 2011 – 6:30pm to 7:30pm
Nehru Centre
8 South Audley Street
London,  W1K 1HF
A talk by Anuradha Dooney of the Oxford Centre for Hindu Studies.
The roles of women in Hindu traditions are changing as they are throughout the rest of the world. What can stories of Sita and Draupadi, of Savitri or Sulabha contribute to  the contemporary challenges of chapati rolling ( or not!)  child-care and career-making.  This talk sketches a broad overview of varying female voices from selected Hindu sacred texts and explores their relevance to Hindu women today.
Anuradha Dooney was awarded her BA in Social Science, from University College Dublin, and her MSt in the Study of Religion, from Oxford University. Her masters thesis was an exploration of faith development in the Vaishnava tradition. She is currently a Fellow of the OCHS, acting as a faculty member of the Continuing Education Department. Anuradha has been a tutor for courses in London, Birmingham, Oxford, Cambridge, and Leicester since 2003. She has acted as the principal curriculum writer for undergraduate degree courses granted by the University of Wales, Lampeter, courses taught in the UK and Belgium. She has also organised and run academic and interfaith workshops, seminars and conferences internationally. Anuradha is a respected lecturer and broadcaster.
Organiser:
Nehru Centre – London
nehrucentre@btconnect.com
(020) 7491 3567

Sherwood Forest: Barclays cycle for the poor (of the OCHS)

Tuesday, 29 November 2011
Fifteen bankers from the Barclays Non-Resident-Indian (NRI) banking team in the United Kingdom took part in a ten-kilometre bicycle and tricycle ride. The enthusiasm in supporting a good cause was inspiring. This transfer from the rich to the poor in a different age took place in Sherwood Forest, once home to the famous Robin Hood. The team were in high spirits and they all had a great time. We are pleased to report that no one fell of their bicycles.
Barclays employees around the world are encouraged and supported to give their time and skills to their chosen community causes. The Bike-a-Thon raised five thousand pounds, which Barclays matched with three thousand pounds by conducting a matched fund raising event to support one of their recognised charities.
Shaunaka Rishi Das, the director of the OCHS was also present at the event. He joined the ride, which took place around the beautiful paths of Centre Parcs in Sherwood Forest. He was pleased with the results of the event and was happy to discuss the benefits this funding would bring to the Centre. “The funds we have raised here enable us to support bright students and scholars from around the world to gain a mature understanding of Indian thought and practice.” 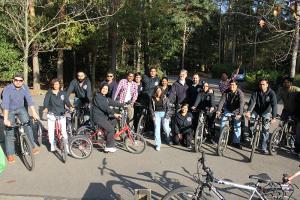 The OCHS ‘Bridges and Barriers to Hindu-Christian Relations’ report, compiled by Dr Jessica Frazier, was launched at the Hindu-Christian Forum (HCF) at Lambeth Palace on 23 November.

The Hindu-Christian Forum was hosted by the Archbishop of Canterbury Dr Rowan Williams. The event was introduced by the Chairs of the HCF: The Ven. Richard Atkinson, Archdeacon of Leicester, and an OCHS scholar, Ramesh Pattni, Interfaith Chair of the Hindu Forum of Britain. It was addressed by Andrew Stunell MP, Sri Shruti Dharma Das Ji, Baroness Richardson, and Lord Popat.
The report, funded by the Department for Communities and Local Government and compiled by the Oxford Centre for Hindu Studies, was consistently praised by all on the panel and was the basis of the Forum’s discussion. The Archbishop described the report as a ‘very creative and stimulating piece of work, which provides an enormous resource for reflecting on how dialogue can be pursued, and how at the grassroots level it is to be understood and worked with.’
Speaking of a recent visit to Bangalore, Williams described a day of dialogue with religious leaders from a variety of Hindu traditions as ‘a deeply enriching experience, a day in which we were able to speak simply and directly about our traditions. We were able to say together at the end of that conversation a number of things about our mutual respect and the understanding that we sought.’ The attendees at Lambeth Palace echoed this very sentiment. 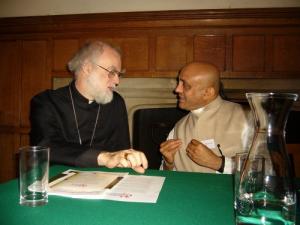 Nehru Centre Event: How to Understand the Bhagavad-gita

Nehru Centre Event
Monday, 21 November 2011 – 6:30pm to 7:30pm
Nehru Centre
8 South Audley Street
London,  W1K 1HF
A talk by Dr Nicholas Sutton of the Oxford Centre for Hindu Studies.
The Bhagavad-gita is widely known as one the main sacred texts of the Hindu tradition but precise understanding of the message it conveys remains elusive, as is demonstrated by the widely differing interpretations of its meaning.  In this talk, we will consider the ways in which the Gita seeks to offer a reconciliation of differing concepts, including Yoga, Samkhya, devotion and dharma and is able to emerge with a coherent revelation that is central to the contemporary Hindu tradition.
Organiser:
Nehru Centre – London
nehrucentre@btconnect.com

Nehru Centre Event: Literalism, Steam Engines and the Vedas: On the Interpretation of Hindu Sacred Texts

How do we understand and apply the teachings of centuries-old texts today? How do we make their teachings, grounded in a social structure that no longer exists, relevant in our modern world? How do we interpret these ideas in the light of contemporary science? In recent decades, the interpretation of sacred texts has become not just the pursuit of a few scholars and theologians in the academies and religious institutions but have become the focus of public debate. How do Hindu sacred texts relate to this discussion? What do Hindu sacred texts teach, and how do we understand what they convey? This talk will examine the nature of Hindu sacred texts and explore the way Hindu theologians throughout the centuries have viewed these texts, how they thought they should be read and understood and how their ideas are relevant for Hindus today.
Dr Rembert Lutjeharms from Brussels, Belgium, is the Librarian at the Oxford Centre for Hindu Studies.He was awarded his BA and MA in Oriental Studies from the University of Ghent, Belgium, and successfully completed his D.Phil. in Theology at the University of Oxford in 2010, focusing on the theology of the sixteenth-century poet and literary critic Kavikarnapura. His research interests are Sanskrit poetry and poetics, early Vaisnava history, and Sanskrit hermeneutics. He is also an editor of the Journal of Hindu Studies, published by Oxford University Press.
Organiser:
Nehru Centre – London
nehrucentre@btconnect.com
(020) 7491 3567