The word yatra usually refers to treks to holy cities – in India. In Leicester, however, the Friends of the OCHS take a different approach to this ancient religious practice.

On Sunday 16 March, the Friends will conduct their annual Holi Yatra. On the auspicious day of Holi, this sponsored walk will start at 8:30 am (registration starts at 8:00), taking participants on a 13 mile walk to visit the following 12 temples:

Afterwards, walkers can take part in the Holi celebrations in Cossington Park.

The walk is open to those of any age, and will proceed at a comfortable pace for all. However, if you are unable to walk for whatever reason, please feel free to sponsor others and contribute to the cause. For more information and to register for the event, please contact the Friends of the OCHS in Leicester at lf@ochs.org.uk, or 07801 241296.

All funds raised go to the Oxford Centre for Hindu Studies. 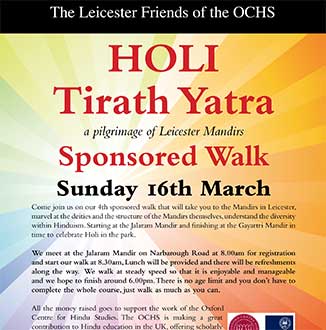 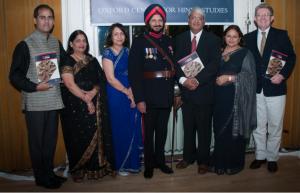 Tuesday, 22 November 2011
19th November 2011
FOCHS Leicester – The City Rooms
Our Leicester Friends of the OCHS (FOCHS) hosted a gala dinner on 19 November to celebrate the achievements and milestones of the OCHS and the Leicester FOCHS.
The lively night began with a reception for guests to meet and mingle.
The programme kicked off with a short presentation about the OCHS after which Shaunaka Rishi Das, Director of the OCHS, expressed his appreciation and gratitude for the Leicester FOCHS who have worked tirelessly since their incorporation in 2008 to support the OCHS by organising fun events including golf tournaments, sponsored temple walks and hikes.
Nishad Shah, the Sales head of the NRI banking team from Barclays, the main sponsors for the evening, gave a short speech which touched on the need for Hindu studies in today’s world.
The High Sheriff of Leicester, Resham Singh Sandhu, then went onto emphasise the importance of community and service in today’s world.
Anuradha Dooney, tutor from the OCHS then said grace in Irish and Sanskrit after which a delectable meal was served.
After dinner the keynote speaker, Alpesh Patel of tradermind.com, floored the audience with an intelligent, engaging, entertaining and inspiring talk. The OCHS’s Nick Sutton responded.
The MC for the evening was Kamlesh Purohit (BBC) who kept the group entertained through the night.
Contact
Facebook
Youtube
Instagram