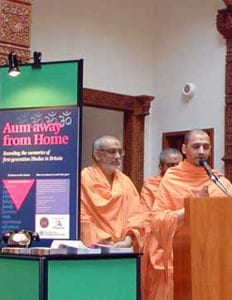 A touring exhibition, highlighting the British Hinduism Oral History Project, was launched on Monday, 22 March 2004, at the Swaminarayan Hindu Temple, in Neesden.

The project, initiated and managed by the Oxford Centre for Hindu Studies was launched at the Indian High Commission in 2001, and has recorded over three hundred interviews, representing the historical and cultural life of the first generation of Hindus in this country.

The Hindu community has a unique legacy to pass on to its younger generations and a history which needs to be preserved as part of a greater British heritage. The Oral History Project offers a real chance for Hindus in Britain to get to know themselves through the voices of their elders, a population now sadly declining.

The chief guest at the launch of the exhibition was the Rt Hon Paul Boateng MP, Chief Secretary to the Treasury. As a local MP he was delighted to attend and said, ‘This Oral History project is very important because it dips into the pool of memory of the Hindu community. The first generation of Hindus to come to this country have had extraordinary experiences and tremendous obstacles to battle against. The exhibition we launch today will enable the younger generation to dip into this pool of memory and to appreciate the foundation of their tradition and culture in this country. I would like to thank the Oxford Centre for Hindu Studies for initiating this project, The Heritage Lottery Fund for funding it and the Swaminarayan Mandir for generously hosting the launch of this travelling exhibition.’

The Rt Hon Domnic Grieve MP and Shadow Attorney General, reflected on the need, ‘for the community to develop its sense of history so that the important story of a migration from Africa, the difficulties of integration in the UK and the great success of the community could be celebrated in the wider community.’

Atmaswarupa Swami, Head of the Swaminaryana Hindu Temple in Neesden blessed the occasion by offering prayers and spoke profoundly of the need for such research, ‘in order to learn from our past, to plan for our future and to make a positive contribution to the society in which we live.’ He wished an auspicious passage for the exhibition.

The Heritage Lottery Fund generously funded the project with a grant of £86,000. The transcribed interviews are stored in the Hindu Archive at the Oxford Centre for Hindu Studies and many are online. The archive will serve as a basis for community awareness and as a valuable resource for future research, publications and media projects. Helen Jackson, from the Heritage Lottery Fund said, ‘We feel the project has huge model value for other communities. There’s no denying the strategic and important vision behind the Oral History Project and the work of the Oxford Centre.’

The travelling exhibition consists of six large panels with quotations from the interviewees divided into categories, an old fashioned telephone to listen to interviews and a pack for teachers and children. The children’s pack helps engage the young in questioning their grandparents about their journey and life before and after coming to the UK.

For Shaunaka Rishi Das, Director of the OCHS, this is a vital means by which Hindus and others can learn about their community. ‘It is a chance for them to engage with their own history, explore issues of identity and begin to interpret their tradition, establishing a British Hinduism.’

The exhibition travelled up and down the country for six months follwoing the launch, stopping at centres in towns such as, Leicester, Birmingham, Glasgow, Edinburgh, Preston Manchester, Cardiff, Leeds, Bradford.