I am grateful to the OCHS for having given me the opportunity to enjoy the Shivdasani Visiting Fellowship for Michaelmas 2019. It has been a wonderful experience to visit the OCHS in Oxford. Not only the congenial ambience of the Centre but also its good collection of books needed for my study helped me a lot. The facilities that I received as a part of the Fellowship to utilise the Bodleian libraries and to attend various seminars and lectures in the University have been immensely helpful for my ongoing research projects. This Fellowship allowed me to interact with great scholars and others who study my own and allied disciplines. The two talks that I delivered at OCHS were a gateway for me to interact with people with keen interest in the topic I spoke on.

I have benefitted much from this Fellowship for my ongoing project on a text of Buddhism in Buddhist Sanskrit, and I could gather many materials for my ongoing works on the Bengali translation of the Jaiminīya Brāhmana of Sāmaveda, and writing a monograph on a nineteenth century Bengali writer Kaliprasanna Ghosh assigned to me by the Sahitya Akademi, India. Not only that, but this Fellowship helped me gather research materials for my PhD students.

I made connections with many learned people in Oxford and academicians from across the world owing to the Shivdasani Fellowship.

I returned from Oxford with a rejuvenated spirit and enrichment of knowledge that will definitely benefit my coming academic years.

It has been a great honour to be named the J.P. and Beena Khaitan visiting fellow for the Michaelmas term 2019. Through the kind and generous donation I was given the opportunity to spend time at the OCHS as a research fellow of the Śākta Traditions research programme, of which I am also co-manager. During the stay, two important milestones related to my research activities in the programme were reached. Firstly, I completed the monograph Glorification of the Goddess in text and ritual: Text, paratext and practice of the Devīmāhātmya in contemporary Varanasi. This is a study of the Sanskrit text Devīmāhātmya, ‘Glorification of the Goddess’, approached in a site-specific context. I delivered two lectures at the OCHS based on this research, entitled ‘Text, paratext and practice of the Devīmāhātmya’ and ‘Theorizing the interaction between textual tradition and contemporary practices in Hindu studies’. Secondly, a first full translation of the Haṭhapradīpikā into Danish was completed as part of the Haṭhapradīpikā translation project led by Dr Bjarne Wernicke-Olesen and myself. The annotated translation with an introduction and essays will be published by the Danish academic publishing house Forlaget Univers in December 2020. The translation group, consisting of former Sanskrit students from Aarhus University and the OCHS, is already planning the next translation project, which will be from Sanskrit into English.

It is always wonderful to be part of the life at the OCHS. With the closing of indological departments and other related disciplines at universities all over Scandinavia it is an intellectual treat to spend time among so many brilliant scholars at an academic institution devoted to Hindu Studies. I have benefited a lot from the conversations with fellows of the Centre and received very useful feedback on my project and ideas. Everyone at the Centre, staff, fellows and students, are friendly and helpful, and the Wednesday lunch is a great opportunity for socializing and meeting new, interesting people. A huge thanks to the OCHS, in particular Shaunaka Rishi Das and Dr Bjarne Wernicke-Olesen, for hosting me again. I am already contemplating my next visit. 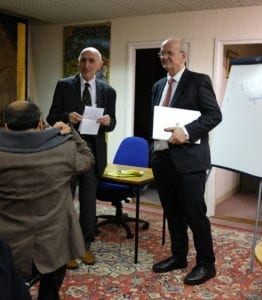 During the Hilary term of 2020 I gave three readings of Sanskrit poetry at the OCHS. All sessions were well attended and attracted students and faculty from the Oriental Institute as well as the Theology and Religion Faculty. I conducted research on the Vajrayāna and on Sanskrit poetry, and had constructive conversation with colleagues, particularly Professor Sanderson. My time as a Shivdasani Fellow at OCHS was most fruitful and pleasant indeed.

I spent a very pleasant and productive time while I was at the Oxford Centre for Hindu Studies as a Visiting Fellow during the Hilary Term, 2020. My main purpose during that time was to complete my research on the situation of the view of texts and manuscripts in the field of Rabbinic literature. This was because while I was preparing my Japanese translation of a lecture by Prof Jonathan Silk, in which he was talking about his manuscript project on Mahāyāna sūtras in Leiden in relation to the views of the scholars of Rabbinic literature, I found their way of seeing manuscripts introduced by him very different from the knowledge of it that I had acquired from my own experience in handling manuscripts in the field of Indian philosophy, and so felt the need that I should know more about their ideas. I then discovered that actually there are at least two very different ideas among the scholars of Rabbinic literature about how to see the origin and development of a text, which leads to two different views on handling manuscripts. I summarised these very interesting arguments and from that perspective analyzed Prof Silk’s approach towards texts and manuscripts. This was published later as a postscript to my translation of his lecture in the journal of Thought and Religions of Asia (Tōyō no Shisō to Shūkyō). I also benefited during my stay from the opportunity it gave me to consult Prof. Harunaga Isaacson, who was then a Visiting Fellow at the OCHS, on his views of problems that face those who work with manuscripts of texts of this kind.

It was a great pleasure also to be able to attend the lectures of Prof Alexis Sanderson and the reading sessions of Prof Harunaga Isaacson.

I am also grateful for the opportunity I had to attend the Śivarātri festival in Aylesbury. It was a moving experience to hear authentic Vedic chanting by Nandana Nagaraj and to see the effort of the Hindu community to maintain their traditions in a foreign land.

The environment of the OCHS was always stimulating, and I am very grateful to the people there who were always very kind and encouraging.

Trinity term 2020 was unusual in every way as the corona pandemic disrupted life everywhere, the UK went into a lockdown, and everyone at the University of Oxford was forced into working remotely. However, the OCHS partly used the pandemic as an opportunity, namely to investigate how tools from the Digital Humanities might be useful to scholarly understandings of Hindu texts, and for creating a future database for the Śākta Traditions project.

As a finishing DPhil student at Oxford’s Department of Computer Science – with an MA in the Study of Religion (Aarhus) and an MSc in Cognitive and Evolutionary Anthropology (Oxford) – I had already had regular conversations with Dr Bjarne Wernicke-Olesen about the potential for using text mining tools from data science in Hindu Studies. As an extension of these conversations, I was grateful to be given an opportunity to work with the OCHS as a remote Visiting Fellow during this term.

During the term, I hosted an online workshop for OCHS researchers on basic workflows in data science, methods for text mining and visualisation of large corpora, and how to make analyses available to other researchers, or the public, via interactive websites. Towards the end of the term, I published a lecture series which extended the conversations from the workshop. This series consists of six videos on YouTube, aimed at a general audience, explaining reproducible data science workflows & tools for text mining. They also contain a step-by-step tutorial (with open materials) of how to use a program called RStudio to download and analyse text from the Göttingen Register of Electronic Texts in Indian Languages (GRETIL). The lecture series can be accessed here.

At the end of the term, I facilitated contact with key figures within Oxford’s Digital Humanities milieu, worked to speed up work on a publicly accessible database for the Śākta Traditions project, and investigated how transcriptions of Sanskrit texts might be helped by computer algorithms for optical character recognition. Some researchers in related areas, such as Professor of Asian Studies at University of British Columbia Edward Slingerland, have started to show how data science tools can be used to supplement traditional methods, and the OCHS may be in a position to pioneer these approaches in Hindu Studies. I will continue to consult the OCHS on these exciting avenues in the future and thank the Centre once again for the opportunity to be a Visiting Fellow.