Reflections from the Writer-in-Residence Prajwal Parajuly. 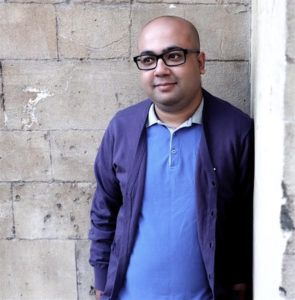 I grew up in a Hindu household, next door to a protestant church and went to a school whose leanings were heavily Buddhist. So, yes, I was surrounded by a lot of religion as a child – at school, where devout teachers took weeks off for a sermon with the Dalai Lama, in the Sunday School lessons that my parents encouraged me to attend and in my grandfather’s bath-time incantations, decibel increasing as the water’s warmth decreased, that we woke up to every morning of our vacation. I learned about God in many contradictory ways – the Sunday School teacher talked about there being only one god, which wasn’t what the altar at home with its manylimbed statuettes corroborated – but the learning was never forced. God and religion were inseparable. God was easy to comprehend – someone who was always looking out for you. Religion was often difficult to grasp. God and religion came together in delightful harmony in festivals – in the fireworks and sparklers at Diwali or the Christmas tree and Santa Claus during Christmas. Then adulthood intervened bringing these rose-tinted perceptions of religion to an end. It started when I moved for college to Midwestern America, where I saw a kind of fundamentalism I hadn’t experienced until then. The nicest people descended on my dorm room to offer a ride to Wal-Mart. Dinner invites came from out of the blue. All wonderful things, no doubt, and what I attributed to the average American’s large heart. Until the generous favors were expected to be reciprocated with trips to the church. “Which church in Kirksville do you attend?” an elderly lady would ask. “I don’t,” I’d reply. “The way you say it, I can sense you know you’re doing something wrong.” Back in India, at the gates of the famous Jaganath Temple in Puri, a white friend and I were refused entry because we didn’t look Hindu enough. I’d probably have passed muster if my Hindu-ness hadn’t come under suspicion Oxford Centre for Hindu Studies Annual Report 2012–13 15 by virtue of my being with a white person. When I declared I was a Hindu, I was asked for proof. Upon my last name giving my Brahmanism away, there were repeated expressions of contrition. The damage had already been done, though. Religion and God had become ugly. Selfish. Tainted. The more I made trips to the bigger temples in India, the less spiritual I felt. Which is why the opportunity to become a writer-in-residence at the Oxford Centre for Hindu Studies couldn’t have come at a better time. I hadn’t expected an academic centre to restore my faith in the religion I was born into. Everything – from the secular approach with which Hinduism was approached to the hour-long discussions that became a free-for-all – informed me tremendously as a writer. ‘Land Where I Flee’, my novel, deals heavily with the many positives of Hinduism and its many ills – of the rigidity of the caste system, the draconian nature of some rituals and the impenetrability of the religion – and discussing these aspects of my religion while also familiarizing myself with their origins and symbolism was a common occurrence on Wednesday lunches. If some expert wasn’t readily available, one of the many books at the Centre’s library were. Given that the Centre is so much a part of our everyday lives, it’d be easy to forget that the organization is perhaps the only one of its kind all over the world. I just signed my North American book deal, which entailed a trip to the US, and I was hard-pressed to find a centre similar in nature and scope at universities such as Yale and Columbia. With the Centre being involved in events as varied as talks by academics, experts and even Amitabh Bachchan, to helping finance deserving, if underfunded, students’ education in the form of scholarships and stipends, the Oxford Centre for Hindu Studies had created opportunities for feeding of the soul as it has for feeding of stomachs on Wednesday lunches. It has been a fruitful experience, one that I am very glad for. The Centre is doing excellent work, and to be a part of it was to see it make great strides.