Param Tomanec is Artist in Residence at the Oxford Centre for Hindu Studies (OCHS). He graduated with First Class Honours from Westminster University London in Film and Photography. His dissertation explored the notion of  ekagrata, or single-mindedness, from Patanjali’s Yoga Sutras in the context of cinema and photography. The idea is further developed in relation to the visual art of American born filmmaker Godfrey Reggio, the director and producer of the groundbreaking QATSI trilogy. 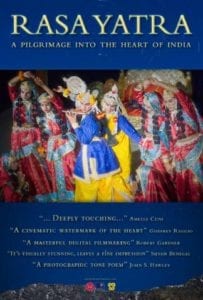 Param’s experience as a photographer and film-maker has been a great gift to the OCHS, supplying us with hundreds of images capturing the life of the Centre.

Param’s studies led him to the acclaimed Indian art-filmmaker Aribam Shyam Sharma from whom he gained insight and advice on capturing the emotion of sacred dance on film. Rasa Lila, the resulting production, is a 9 minute clip from still images documenting the Vasant Rasa in the Spring of  2006. see http://vimeo.com/param/rasalila

As part of his degree programme, Param developed a challenging cinematic project  entitled Rasa Yatra (49 mins) with Dr Kenneth Valpey, fellow of the OCHS. Rasa Yatra is a poetic audio-visual journey from the Himalayan mountains to Vrindavana, a prominent place of pilgrimage 130 miles south of Delhi. The film had a scholarly preview at the Spalding Symposium on Indian Religions. Accompanying the film is a pictorial book of the same name.
Param’s aim is to pursue MA studies in visual anthropology.

In Rasa Yatra, Param Tomanec gives us a photographic tone poem that is utterly worthy of its title. Rasa yatra would be, in Sanskrit, “a journey of sentiment” — or perhaps “a journey to sentiment.” A dominant tradition of Indian aesthetic analysis chooses the metaphor of liquid or flavor (rasa) to describe the way in which all emotions are related, and how they go to the core of who we are as efilembodied beings. Tomanec takes us on a journey that makes this taxonomy of sentiment go into geography with photography of remarkable beauty. Forty-nine minutes, but what a journey!

Param was invited to lead a seminar at Delhi Visual Arts in  September 2011. Entitled: “Recasting Subjectivity: Image, Time and Memory”, the seminar explores new creative posibilities of the photographic medium in relation to Hindu pilgrimage experience and beyond. In the same month his photography was featured at Oxford’s Meller Merceux Gallery.